When renovating a kitchen in a 100-year-old villa, most believe it is important to retain the original charm and character. John and Jacqui Mangham wanted to do just that, while also creating a modern kitchen design with more usable storage that would suit the style of their early 1900s villa.

They also wanted to fit in a larger double door fridge and make their pantry space more accessible. Jag Kitchen designer Nairi Nasrallah followed the existing footprint of the kitchen to utilise the existing polished flooring and shape of the room.

John says that the original kitchen was not bad looking, but it had dark tiles as a benchtop and sticky, poorly functioning drawers.

“The drawers would get stuck and the kitchen was both dated and difficult to use. Also the angled corner pantry was not very practical.”

“Now there is much more efficient use of space. I can now take things out of the dishwasher and put them straight in the drawers. It’s amazing how well it works,” he says.

The clean, white and bright look of the renovated kitchen sits well with the overall look of the house. The classic profiling is timeless and the soft close drawers make it a lot more usable than the original cupboards. The overall look is a more contemporary yet classic kitchen design.

The focal point of the kitchen is the elegant 20mm Smartstone Statuario Venato engineered stone benchtop. There were also five draining groves cut into the benchtop, giving the under mounted sink a seamless look.

Kitchen Designer Nairi explains saying, “The engineered stone the customer chose is one of the most difficult stones to vein match, so the benchtop team worked hard to match the veins in the stone. The end result is a stunning kitchen.”

Complimenting the mainly white colour palette is the traditional bar handles which work well with the marble look benchtop. Adding a subtle texture to the white kitchen are the light grey Italian subway ceramic tiles that were sourced by the John and Jacqui. The neutral colour palette means the kitchen will not date. 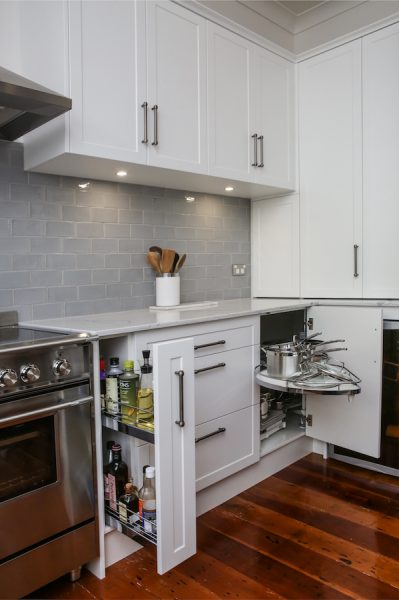 Adding to the convenience factor are four pantry pull-outs. Beside the fridge is a Hafele Dispensa Pullout Pantry making it easier to access everyday items. Beside the cooktop is an Enko pull-out which stores oils and seasonings. Le Mans mechanism in the corners give better access.

There are lots of large soft closing drawers that fit cutlery, cups, glasses, pots, crockery and more. The overhead cabinets create more storage space and give the kitchen a much bigger feel.

“We used Dezignatek doors with Rhonda profiling which is a modern yet traditional look,” says Nairi.

John says that the reason why they chose Jag Kitchens is that they could get everything done at one place and the process was really simple, without hurting the pocket.

“One of the school parents who had got their kitchen done by Jag Kitchens recommended them and I’d be more than happy to recommend them to others,” says the satisfied customer.

For many of us, the kitchen is the hub of the home. It’s where families come together every evening for dinner, and on the weekends...

Kitchens are busy places and the focal point of most homes, so they can often become a centre of clutter and chaos for busy families....

There’s something about a kitchen, the hub of the home, that makes it far more than merely a cooking space in a house. If you’re...
Scroll To Top